Dinkydale, home of the Lands End Pasty Company, along with Shuang Cheng (another good option in Dinkytown).

So, I’ve been back for a month now, subbing at library branches throughout the Hennepin County- I’ve been at nine locations so far, and its been great! I really enjoy being back in the Twin Cities, and working at different places every day is a great way to get to know the city after having been gone so long (well, two and a half years, anyway). With the weather warming up, there is less of the desire to barricade myself indoors after work as well. My attempts at biking to work so far have been, while enjoyable, more of a brief ordeal than a recreation. One problem that I find myself having, though, as I commute across the county, is trying to avoid the temptation to stop in at one of the many restaurants nearby instead of cooking the food I’ve already got at home! Leaving a shift at East Lake or St. Louis Park or Northeast, my stomach grumbles, there are so many options nearby and on the way home, so many old favorites and intriguing new places I’ve wanted to check out, that it can be difficult to avoid stopping in to grab a bit. Meanwhile, the groceries wait at home, ready to be cooked up for several lunches and dinners over the week. Okay, okay, I’ll make that pad thai recipe I’ve been meaning to try. But tomorrow, for lunch…

Here are some of my favorites are a few of the cheap eats that are hidden away throughout the city. I’ve been singing the praises of falafel, pizza, and hot dogs (vegan or otherwise) over the last few entries, so here are a few treats I’ve been meaning to mention.

One thing I really missed when I lived out of the metro was all of the places to grab a bahn mi, those delicious Vietnamese-French fusion sandwiches which can be had at numerous Vietnamese shops throughout the metro; my favorites are My  Houng Kitchen along Eat Street (i.e., Nicollet) in Minneapolis, and iPho, along University Avenue in St. Paul. Both can be gotten for about $5. I have heard it said that it is true that the Twin Cities have the best Vietnamese food in the States. 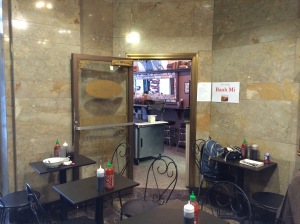 Maybe that’s true, but it is definitely really good! You basically can’t go wrong with a Bahn Mi and the many shops that sell them are always good stops.

Another place I missed, hidden away in the Medical Arts building on Nicollet Mall is La Belle Crepe, a great place to grab lunch in downtown Minneapolis. They have a variety of affordable crepes, both sweet and savory. It seems a pretty popular place for the downtown lunch crowd, offering sweet dining both in it’s little, cramped storefront, the ornate art deco marble interior of the Medical Arts building, and, now that the weather is nice, the sidewalk on Nicollet Mall. Also, be sure to take advantage of the punch cards offered to frequent crepe eaters. Incidentally, they do bahn mi as well, though I haven’t tried one yet myself.

If wrapping stuff up in a light, fluffy pancake sounds good, how about a nice, hearty layer of pastry? The filling specialty of the British Isles and the Upper Peninsula of Michigan has been popping up here and there as well of late; pasties, those savory, questionably pronounced gourmet hot pockets that used to be eaten by miners for lunch. There are a couple shops set up to dole out the humble pasty, Lands End Pasty in the Dinkydale building in the heart of Dinkytown, and the older food cart, Potters Pasties and Pies. If you haven’t been able to find the cart anywhere, they also have a shop hidden away in a basement behind a building on Como Avenue. Each have a fun UK theme and both are quite delicious, offering both vegetarian and carnivorous options. Of course, at Land’s End, anyway, the vegetarian options seem to go pretty quickly. The Banafee Pie at Potter’s is a great dessert, but at Land’s End, they bake a little apple pie into the end of every pasty. Not so good if you’re one of those people philosophically opposed to foods touching each other, but then, that’s what pasties are all about, right? Nothing better than a full meal you can eat in one go!

Now, I just need to find a good place for some vegetarian poutine. It is coming to be the season of the food trucks, so I’ll be coming my eyes open!

I often find myself flipping through free papers for advice on where I should stop next while waiting for the bus, mouth watering as I anticipate my next stop. Remember when the Onion distributed papers in the Twin Cities?